That was a fast 2 hours!

This was my first Sprint. I stumbled on it just tuning around and decided to give it a go. It was fun. Wish I had paid attention and gotten on the air for the entire two yours!

I started late but still had fun. Conditions were good on 20m for the first hour. I finished up on 40m with plenty of contacts but some QRN.

Rig this time out was my Kenwood TS2000 running 75 watts into my all-band dipole at about 25 feet. Key was a Vibroplex dual Iambic/Straight. Of corse I stayed on the straight side :O)

Conditions where better tonight. Had a blast as always.

I was very busy on 40 even though the noise level was high. There was a few signals that I couldnt pull out of the noise. I went to 80 the last 20 minutes and finally worked the club station.I really enjoyed this one. 73, k9dth

Almost forgot SKS tonight, figured it out just before the start. Big suprise to work Andy UU1CC right off the bat. Spent half time on 40 then 80. Mix of CQ and S&P. Also a mix of multiple calls and times with nothing at all.

Another great sprint. The noise level on 40m was very high but I managed to make a few contacts. Congrats to Russ who did a great job operating the club station. See you all next month. Best 73 (and pray for sunspots), George

Operating conditions were pretty good tonite for a change. Had a lot of fun making a lot of contacts with the club station. 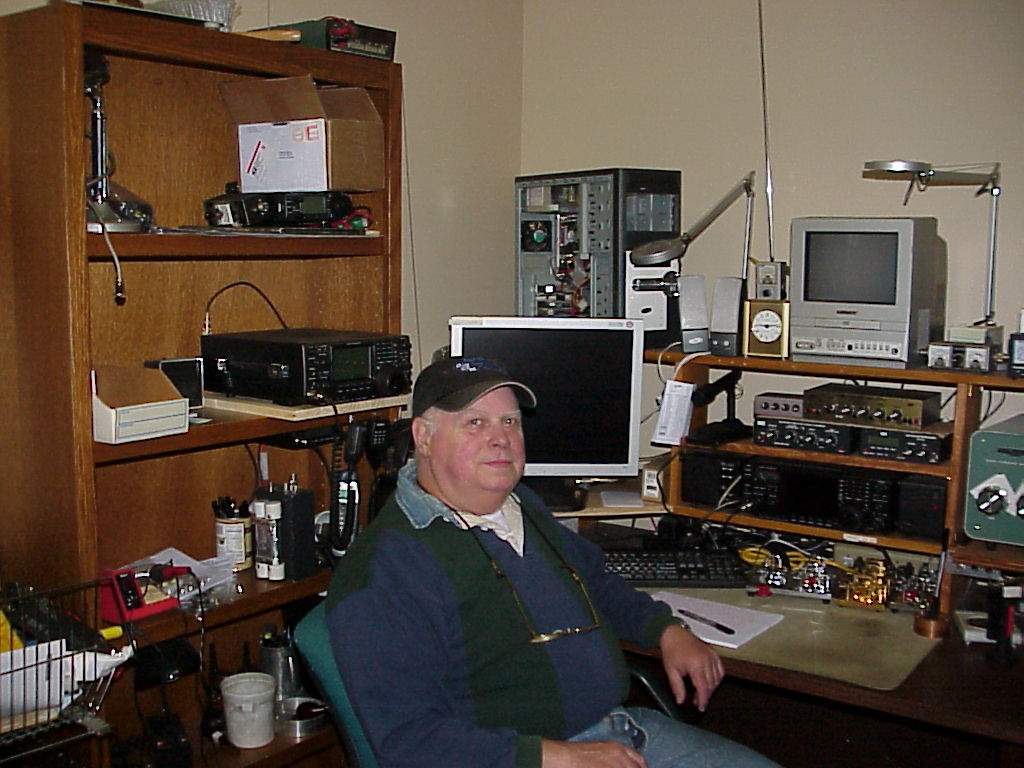 enjoyed it as always, 73 all

Had a great time this evening! I usually stick to 40M, but tonight jumped around the bands a bit. Didn't make many more contacts than usual, but picked up a few new numbers. Will be back next month!
Brad- N5LUL

20 and 40 were good. Sounded like a good turnout for the Sprint. Pleasant surprise when I stumbled across Russ running K9SKC on 40. Always enjoy our sprints.

Next door neighbor is out of town so I was able to run my 80 Meter counterpoise wire out on top of the wooden fence.

40 Meters was in pretty good shape. The Sprint was very enjoyable. I still wish the bands would improve, but meanwhile I'm having fun.

Tnx Russ you are always good for a couple.

My first attempt working QRP. I thought for sure no one would hear me on 40 or 80. Good operators out there! Was nice to see all the participation. I was unable to find Russ - how did I miss him ;).

Looking forward to the next one.

Thanks for putting this event on! Great decompression time after a busy day at the office!

Hey...the bands were great for me. I stayed on 40m for most of it, then moved to 80m for the last 15 minutes. A phone call took me out of the running...but I had fun just the same. See ya'll next month again.

QRP is where it's at - thanks for all the contacts.

Managed 6 QSO's in the last 20 minutes. Mother nature saw fit to dump a flu bug on me. Started with Russ's bazooka. Fine job on the club station Russ, as always you were booming. And finished with Kieth's 579 pea shooter. Great signal. Hope everybody had fun. See you in the Mystery Sprint.
Randy _ KB4QQJ
[sniff sniff cough cough] 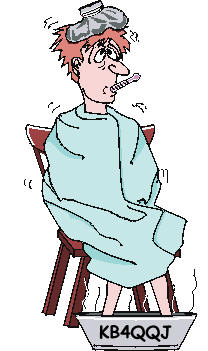 I'm not on the radio Dear, that's my teeth chattering ;-)

Conditions were good on 20, 40 and 80M here in Maryland. Finally made 30 QSOs in an SKS. Thanks Russ for 3 bands. Still need Delaware for SKCC WAS.

Fun as always. Used restored 1916 Vibroplex most of the time.

First SKCC sprint. Fun time. Conditions were great till rain moved in. Funny how fast the band can shut down.
Worked 8 stations in all and worked 8 gud operators. Ran a full 5 watts
72's till next sprint.
Rich/wd0k/#5164 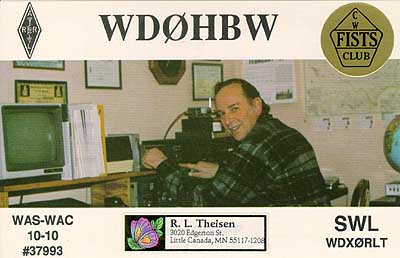 Working sprints for funds for a new qsl card?

I got out to the shack a little late, but got the rig fired up on 20 meters. After pounding away for a few minutes, K3TM, Roger, came back and provided the first QSO of the sprint. 20M kind of died out after 45 minutes, so I ventured onto 40M and was fortunate to find a convenient slot to operate in for the remainder of the evening.
Signals on both 20M and 40M were pretty good from most parts of the country, but no DX was heard or worked until VA3UN, Larry, jumped in right at the end. A WY QSO was eked out with K7RXC in Casper (non-member) on 40M. Other than CA, AZ, OR, and WY, there was little else to be worked out here in the west. They were probably there, but I just didn't hear them. Some more Nevada activity would be nice, too. 73 'til next month.....

The bands were ok for a change, but I wasn't and had to quit early.
Thanks to Russ for K9SKC on 2 bands. Biggest signal came from WA1BXY
at 20 over, but Russ and Cookie came close with 10 over. Sure were
alot of bugs on the air during the sprint. There was some great action
on 40 meters above 7100 too! All my contacts were on 20 and 40 meters. 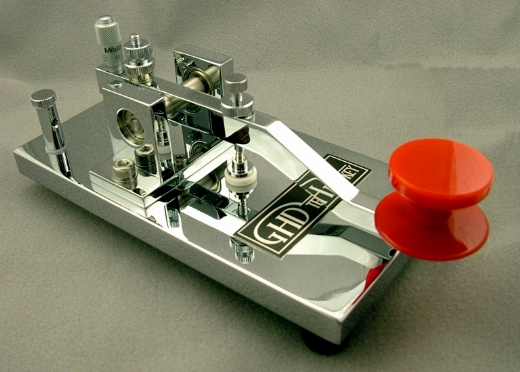 One of the keys I used for this sprint - GHD GT501MIL

Had other commitments/activities going on, but wanted to put something on the board. Worked folks as opportunity permitted between work phone calls. 2/3 of my calls were folks I hadn't worked before. Very nice. Bring on the new C's and T's!

20m was gone by sprint time; 40 & 80 had lots of QRN, but pretty good activity. Had to pull the plug early on account of thunderstorms, too bad. Oh, well... it's that time of year.

I finally got on with 10 minutes left in the Sprint. Worked only 2 stations but they were a fun 2 stations. Bands were filled with noise at this QTH. But.....I promised to post my log (no matter how small), and I did. Looking forward to the next WES. Again..... SKCC ops are a pleasure to work. 73 to all.

I had a great time. I only worked 20 meters. I worked ZL2BLQ and ZL2SWR in New Zealand and after the sprint I worked XE1GXG. Lots of Fun even though I had to keep the XYL happy by stopping for Dinner in the middle of it.
See you all in the next one.
73,
Gordon
N6WK

Another fun sprint. Tried 20M for first 15Min and heard absolutely nothing here. All contacts and remaining time spent on 40M. pretty steady for entire time but slowed a little at the end as I exhausted all of the S&P stations.

First event use of the Softrock IF adapter on the Drake r4a where I actually used the Softrock to do the listening.

This sprint was a lot of fun! 20M was so-so but 40M was really hopping. Was pleasantly suprised when Andy UU1CC gave me a call. Thanks to Russ at K9SKC. :^)

Since xyl took me shopping, I got started about an hour late. Scurried up to the second floor workshop shack and spent over 45 minutes answering CQ's,... with NO results! It was as if I weren't even there! Finally, I decided to take the rig (703 Plus) to the house shack. There, I found out there was zero output on transmit!! In the waning minutes, I fired up the Mark V, throttled it back to 5 watts and managed to make contacts with Kieth (WI0S) and Gordon (N6WK). Thanks guys.
Now,... where's that rig box and packing materials?

Russ, thanks for operating with the club call.
By luck I bumped into you on the band for at least one QSO.

Thanks to all participants.