I haven't decided if I like this QRPp business yet or not. I ran 100 mw tonight.
It sure takes a lot of patience and a few tricks to get through sometimes.
Thanks Carl for K9SKC. I used my Kenwood TS-870 with a WM-2 wattmeter.
Antennas were inverted V on 40 meters and an inverted L for 160.
Keys were GHD GN207AB, GHD GT501MIL and Vibroplex Annie.
Until next time, 72 Bill NT9K.. 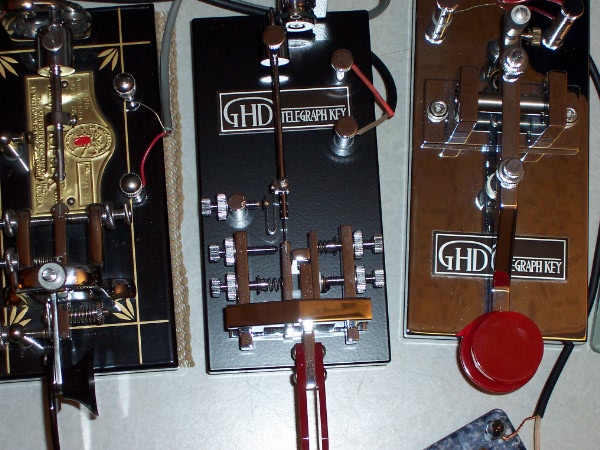 Nice evening....worked 20, 40 and 80 meters tonight with most of the contacts on 40 meters. Snagged only two K3Y calls. Bands had some QRN tonight...although fun sprint. Some pretty good fists out there...thanks to all the activities of the SKCC. Nice job all!

Started late, then I was caught up in a non member QSO (thats OK I tried to recruit him).
Finished up with a few S&Ps. Nothing to brag about but I had fun.

First SKS worked QRP. Used the OHR500 and the Navy Flameproof. Did not do too well, but still had fun. I was attempting to work K3Y stations as QRP, got a new one for QRP: K3Y/7!

Good time. Wish I'd had more time to dedicate to it.

I really miss the winter schedule for SKS. It now falls right in the3 middle of when I have to give KD4AEH (xyl)a good listening too...hi hi I did manage to get two contacts in in the final minutes. Thanks Jim and Carl. Well done, both of you. Great job on K3Y/3 and K9SKC. At least I got to play without getting skunked!!
Thanks Dick for a fun event. Bands seemed in good condition too.

Good to hear lots of activity above 7.100

Worked 40M and 80M. Started out a bit rough. After and hour 40M picked up. Moved down to 80M and had a good run. Did better than I thought based on the first 45 min.

THANKS FOR WHO EVER SAID PRESS HARDER ON KEY SURE HELP ME ALOT.
thanks John

Many signals heard but bands condx in Maryland were very noisy. Most stations were RST 449. Still can't find Delaware for the last state toward SKCC WAS.

I didn't log 3 QRP QSO's tonite because I could not get their numbers and/or call correct. I used 20 minutes of sprint time on these qso's. If a station is having trouble copying you, don't send the info once or twice. He is trying to get you tuned in and by the time he has you tuned in the number or call or whatever is not being sent. I "agained" two stations tonite at least 15 times each but could not copy their call or number because they never sent it more than twice each time. Try 5 or 6 times if you are not being heard and the station on the other end may be able to get it on the first go around.

40 meters was very good, and kept busy there for an hour and fourty five minutes. Used my 2 element 40 meter quad up at 70' - that way I could hear the qrp guys! Finished last 15 minutes on 80 meters. Great fun, thanks to all who worked me.....Bert 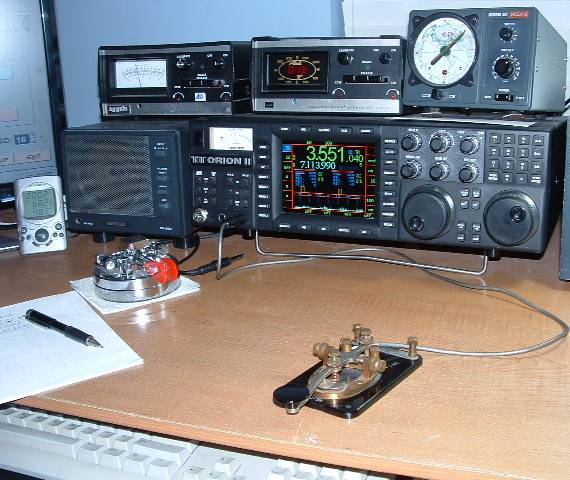 40 Meters was the place tonight.

Thanks so much for letting me use the club call! I enjoyed it! I know this - no one will ever invite me to a dxpedition HIHI -sorry folks for any poor operation. I had some log troubles with having to visit each and every textbox.
I think I lost a contact due to those issues.
I tried to work 80m and got no joy, my tunner is not what it could be I guess (keying turnned my monitor off once) Nothing like a little rf in the shack.
So thanks and hope to meet you all again on 40m HIHI
Carl
KC4FLT
aka (once) K9SKC

Used the K3Y/7 callsign and had a blast. 20M was nearly closed so 40M was the meat and potatoes. 80M is not quite ready here on the west coast even at the end. Called several stations and not one heard me. Thanks for the Q's and see you next month.
73 Paul NG7Z

Wish I could of invested the whole two hours! Had company. Enjoyed it!

Although I've had my number for a while this was the first evening I was able to participate in a sprint. I mostly listened to the sprint this evening. Toward the end I heard Carl KC4FLT operating the club station. Good to meet you Carl. I also heard Eddy - W7GVE an thought I had him worked. we were wiped out by a flood of qrm. Sorry Eddy we can try again another day.
(Some of the others I heard this evening were k5prx,wa4ar,k4pax,wa4an,k9dth,k1nv.............)
I have a pretty good impression of the SKCC group. You seem to be a courteous and friendly bunch.

Although I only made 9 contacts this evening, I had a great time! Thanks to the C's, T's, and K3Y stations for helping boost the score. Will be back next month to try it again.

I stayed on lower part of 40. Four hours of K3Y/5 and 2 for the Sprint are almost too much fun for one day. 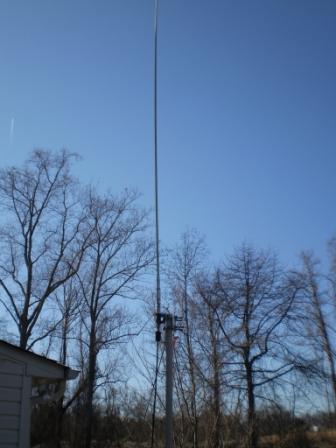 Home Brew Vertical with whip feedpoint about 5' off the ground on a PVC mast.

Enjoyed working the sprint as K3Y/4. It was nice to hear some of the new SKCC members. Thanks to all for the contacts.

Thanks for the fun 2 hours. Bert, K6CSL

I started on 20M and worked down to 40M and 80M after local sunset. Nothing was heard on 160M. It was good to work the K3Y participants plus Carl, K9SKC, on 7.114 MHz. Hats off to them! I'm going to have to get out the calculator if the scoring gets any more complex.

I think using the grid square as part of the exchange might be a good move. CU next month....

Rough night up here. Handed out lots of low RST's but received OK RST's. Better check if there's not a cold bird frozen to the antenna.

Great sprint, my first. Had a blast. Using IC-746PRO to Delta 240 on 40 and C31XR on 20. Nothing heard on 15. Forgot to check for special station on 7114, darn. Looking forward to many more fun activities with SKCC. Great group and thanks for the many welcomes.

Worked this sprint as K3Y/1. 40 M seemed really slow, usually strong stations were weak. So I went to 80M and had a couple of nice runs interspersed with slow periods. Nothing going on on 160 M. Once again Alan, WA1AR, came through to give me MA.

All in all another fun sprint made moreso by operating K3Y/1. 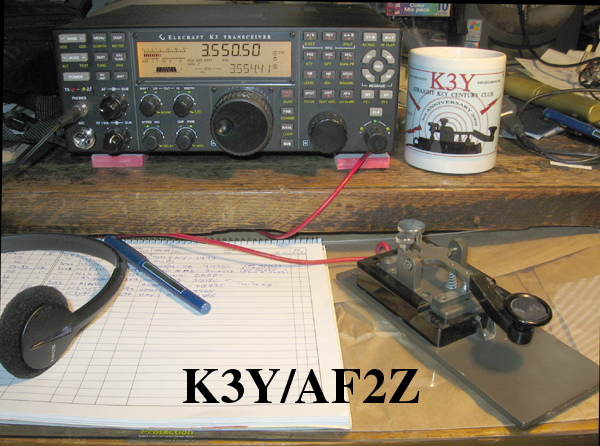 Band conditions were fair here in WNY for the SKS Sprint, even 20 meters was open a bit. Worked 4 club calls & some familiar call signs too. Thanks to all who participated. 73

Over by the trees and to the left is one of my QRP hangouts, but not this time of year.
This is in the 5200 acre NY State Wildlife Preserve that was once RCA's Radio Central transmitter site.
73, Dick. 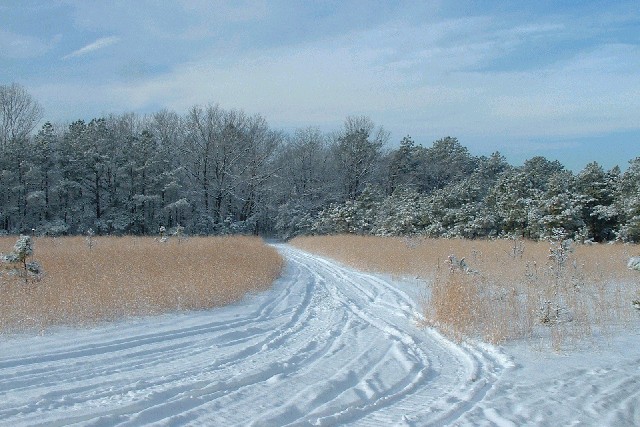 I keep forgetting to go up to 7114 KHz, but otherwise lots of fun.

I had a great time for a little over an hour, but would have liked to have been able to get on sooner. I spent my whole time on 80M. My antenna system probably does as much attenuating on 40 as it does propagating :-)so I decided to go to 80 and never left. K3Y/3 operating has my fist in the best shape it's been in for many years. Ten Tec Omni 6, navy flameproof, 90 watts, 80M inv vee all the way up at 15 feet in the center! Thanks to all!

Another fine Sprint! Was able to work Carl, the Club Station- nice signal! Had 3 K3Y/x stations to boost the score. The band (40) wasn't all that cooperative, but still able to get what I got!

Looking forward to the next SKCC activity.

I got a kick out of everyone's comments about 40M. It was *great* here - it has never been that good for the SKS before. I notice everyone from /5 said similar. I wonder what the ions did differently?

CQ'ed a bunch and got some QRP'ers. Lost more than I logged though: sorry guys I really did try to dig you out! 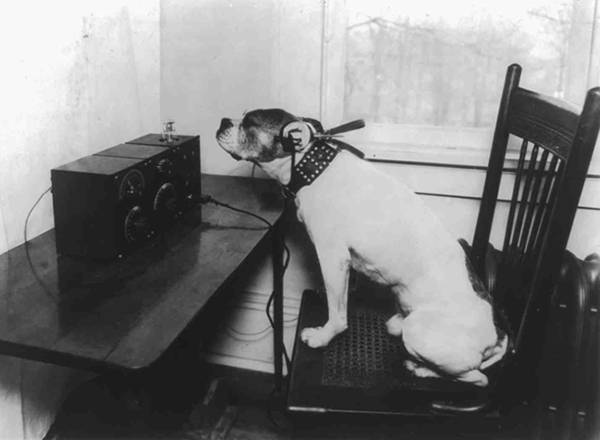 Doggone it, I know I heard him! 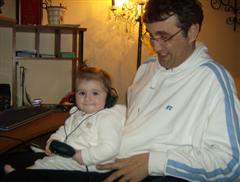 What do you know about the Maidenhead grid square system?